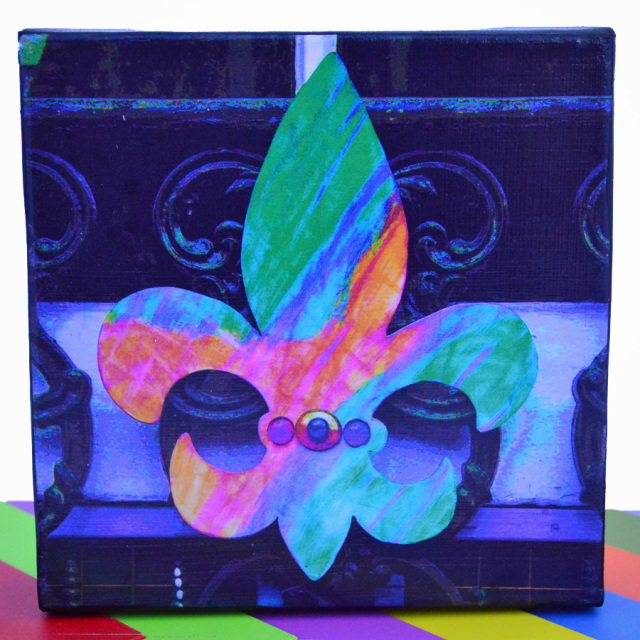 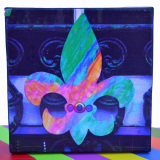 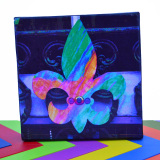 As you travel around New Orleans you will see many forms of the Fleur de Lis.  They adorn churches, iron fences, signs, t-shirts, jewelry and thing Mardi Grass. The Fleur de Lis has been a symbol of New Orleans from its beginning.  The Fleur de Lis is the most instantly recognized symbol of New Orleans.  This symbol has ancient roots in Babylonia and Egypt, but the symbol of today was born around 1062 A.D. as the nation of France emerged from the Dark Ages.  This iconic symbol adorned the Flag that French explorer Sieur de La Salle planted at the mouth of the Mississippi when he laid claim to the Louisiana territory in the name of the royal family from Orleans.  The Fleur de Lis symbolizes the Holy Trinity, the Lily of the valley, means royal, and is an emblem of the French Kings sovereignty.  Look for this great emblem as you travel up and down the areas of New Orleans.

This particular Fleur de Lis adorns a beautiful fence in New Orleans.
Add to Cart
Canvas Art The original digital art photo is printed and affixed to a 1 1/2" gallery style canvas. It is coated with two layers of sealer, which produces a unique matte finish. The sides of each canvas are hand-painted black giving it a modern touch. As part of my "green" contribution, each canvas hangs from a recycled soda can tab. Available in various sizes from 6"x 6", 8"x 8", and "8x10". . These small photographic works of art are dynamic enough to stand alone or may be hung as a collage to create your own customized wall art.
Custom sizes available>>> just shoot me an email form the link above!!
Coasters  Waterproof photos and affixed to 4.25"x4.25" glazed ceramic tiles.  For extra protection a second waterproof laminate is applied over the photo.  Finally and full square of cork is glued to the bottom of the coaster for protection of your surface and it can even be flipped over with the cork side up for one of those pesky glasses that sweat here on our hot days in the South.
Jewelry
Pendants
Earrings
Metal Cuff Photo has been applied to a  1 1/2" aluminum metal cuff then sealed with 3 layers of polycrylic.